When’s The Last Time You Saw The Government Swear?

When charged with ensuring millennials listen to the PSA’s plastered on the ceilings of subway cars, what is the easiest way to catch their attention? Swear.

“Outrageous”, “Disgusting”, “Immoral”. These are all words used by a Facebook user to describe a hoax subway overhead ad supposedly by the MTA. My description of the pretend campaign? Pure Genius.

With outrage and controversy growing over the latest photoshop stunt featured below, it is important to step back from the vernacular used and understand the context and meaning of the message.

The term fuck boy, recently coined by millennials, is defined in the Urban Dictionary as “the type of guy who does shit that generally pisses the population of the earth off all the time”. In short, this is a person with loose moral character and having little regard for the respect and space of others.

Think back to your last subway ride. Did you encounter someone who was a “pole hog” or “man-spreading”? Chances are you did. The younger generation in New York City is known for disrespecting the space of others on subway cars and furthermore, known for not giving up a seat for the elderly or those who require it. With changing personalities comes a false sense of entitlement. Listen to any Gen X’er and you will hear praise of the good ‘ole days when gentlemen would give up their seat for a lady. There is a reason you hear these remarks more frequently in 2016. Millennials hold a sense of entitlement, arguing that they shouldn’t have to give up a seat, or move out of someone’s way because they paid for that spot, or more commonly “they have a right to be there”. 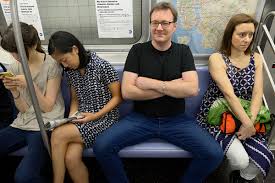 This fake ad, while vulgar, speaks to the target market of the campaign in terms they understand. By using the vernacular in the ad, the MTA (or mysterious photoshopper) is able to identify with the target market by referencing how their actions can be construed with the negative connotations that follow the moniker “fuck boy”. It is also comedic to note that the red figure in the picture has a white triangle below its neck. This is meant to visually show the shirt is a v-neck cut, a popular shirt style of millennials who will further successfully identify with the ad’s copy.

When I think of a great ad campaign, it is one that speaks directly to the target while evoking an emotional response. This fake PSA’s message is loud and clear (to its target), “Millennials, respect the space of others”. While older generations may take offense to the language used in the copy, they should look at the benefits of using such a term to speak to those who need to heed the message the most in a way they will. After reading that ad, most millennials will become aware of their selfish actions, and yield extra space for others to hold onto the pole, or grab an open seat.

Garrett Meccariello is an aspiring brand manager based out of NYC. In his free time he can be found building the next great brand, exploring the city, and eating a lot of cured meat and cheese.